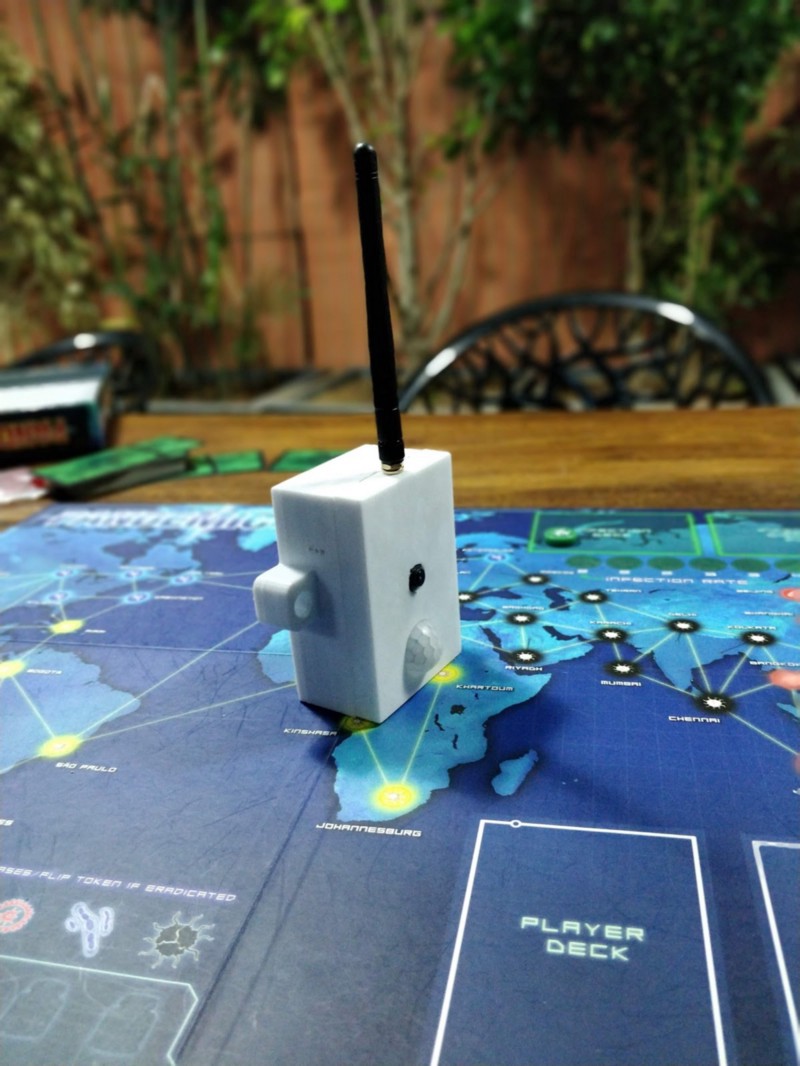 I was doing my second year B.Sc at KG College Of Arts & Science. To escape from the humdrum routine and mundane tasks of daily life, I joined a bunch of young passionate friends who were volunteers in the forest patrolling team of Western Ghats to support the officials in monitoring the movement of elephants round the clock and alerting the residents nearby. On one such night of rigorous patrolling, we encountered an elephant and unless you’ve come face-to-face with an animal more than twice your height and 75 times your weight, it’s hard to fathom how the experience impacted my perception of life in the universe. It could’ve tossed me into air like a rag doll. My heart was racing so fast, that I could hear it thumping in my chest’ says Kavin as he recalls the most spine-chilling incident that happened during one of his many forest patrols.

To help the residents along the forest fringes lead a life in harmony and to conserve the elephants from retaliation attacks, he has prototyped a device that automates the process of monitoring the movement of elephants and alerting the officials and occupants nearby.

The enormous increase in human population propelled by agricultural and industrial revolution has resulted in conversion of forests into human settlements, reducing the forest peripheries and the buffer zone that the elephants regularly use. This increase in human intervention, particularly along the fringes of forest is a major driving force behind the escalating violence. There is a major transformation in agricultural practices from rain-fed farming during the previous decades to cultivating perennial crops now. As enough fodder is available along the fringes, elephants foray into the fields and cause a massive damage to the crops, depredate the livestock and threaten the human population nearby. In some extreme cases, the farmers have been forced to abandon their farms. Though the growing human settlements is often seen as an opportunity for economic development, it comes at a cost of threat for someone who is living in the wildlife borders.

Elephants also pay the price of conflict. Residents & Farmers erect illegal electrical fences(connected to the main grid) or dig trenches around their field to protect them from the intruding elephants. When elephants unknowingly come across the electrical fences they get electrocuted. Farmers also destroy the forests believing that this will prevent the elephants from using the area.

Officials of forest department and volunteers from various NGOs conduct patrols throughout the nights at major checkpoints along the fringes that are frequently prone to conflict. They work to ensure that neither one gets harmed while jeopardizing their own life. This demands a minimum of 5–10 members and once they behold the elephant movements, they block the traffic and manually alert the residents. This also affects the daily routine of these volunteers & officials and makes them less productive, who could otherwise be engaged in performing other skilled operations.

During their sixth semester in Feb’18, Kavin and his friend Pavith came to know about the hardware hackathon organised by FORGE from their seniors and they applied with their idea of solving the above challenge by automating the process of wildlife monitoring, in particular to those of elephants monitoring. They demonstrated a potential Proof-of-Concept to build the system leveraging the image processing technology that is capable of differentiating the animals passing-by and with that, they got admitted to the fully sponsored ProtoSem, a 20-week comprehensive curriculum that aims to catalyse product prototyping activities among students & innovators and support them in innovating solutions for real-time problems as part of the pre-incubation program, FORGE.FELLOWS. It also provided them 24 * 7 access to the HWJunction- a comprehensive suite of machinery housing a state-of-the-art rapid prototyping and industrial labs to help the innovators accelerate their process of building a Proof-of-Product.

While validating their problem, the team studied various solutions in existence including the early warning system with passive infrared sensors fixed across the checkpoints [in particular the one at Periyanaickenpalayam], that warns the residents about the movement of elephants in the surrounding area so as to provide them an increased time period to undertake measures and safeguard their crops & properties.

The system doesn’t have the capability to differentiate elephants from other animals. It detects every living-being that crosses the device and sends a warning signal causing an unnecessary panic among the residents in the middle of their sleep.

The farmers also rely on fake electrical fences to threaten the elephants psychologically and prevent them from electrocution, as in the case of illegal electric fences. But, elephants sometimes destroy these fences and damage the crops & properties.

There is also an ‘Informant’ system, a community-based method implemented at Valparai, where there is a GSM module connected to a siren, that could be heard for about 3 Kms. When residents observe movement of elephants, they make a call to the GSM module number provided, that automatically alerts the people in the surrounding.

There is also an active Whatsapp group with Anti-Poaching Watchers in Gudalur, who share their location on Whatsapp as they notice elephant movements. This alerts everybody else in the group who then pass on the information to the officials in the particular area. The news is also conveyed to local channel operators who then display alert messages regarding animal movements to help the farmers & residents undertake precautionary measures. The process gets stalled and proves to be ineffective whenever there is a lack of connectivity in the interior region.

“As the course began, Vish Sahasranamam, CEO, FORGE shared various conceptual insights to emphasize the significance of developing prototypes in order to effectively validate the true worth of the solution to the end user. He helped us understand that building a Minimum Usable Prototype should be the most critical step and the first milestone in our innovation pursuits. He directed us to focus on building, testing and proving a smaller scope of the solution, A Good is Good enough Solution with those critical features needed to convince the early adopters to try the solution and get their feedback, as they perceive the true worth of the product”.

At FORGE, We adopt a process of managed innovation supported by iTOOLS, the Innovation Toolkit that offers several tools & techniques across the entire spectrum of innovation from idea to enterprise, to enable innovators rapidly design and develop prototypes. Innovators are also offered in-depth support for an effective Problem validation and Customer discovery, Delivering an effective & winning Pitch to the investors, IP Drafting & Filing, Grant Proposal Writing etc. apart from the guidance and mentoring in refining their tech enabled solutions to make sure they aim to achieve the MUP in the shortest time frame and with the lowest amount of money. They learn the fundamental discipline of proving quickly and with least expenses that their solution is accepted by the target beneficiary as the permanent solution and are willing to pay a defined price for it.

To fast-track the progress and mitigate various risk factors, right from the first step of the Innovation process, We adopt a unique, competitive and fun-based tool to evaluate Product Innovations- Product Innovation Rubric, that validates inherent risks by linking the progress to customer-acceptance and customer-commitment contrary to the habitual spirit of evaluating them against Market/Business Potential. Product Innovation Rubric is a framework that scores innovations on a on a scale of 0 to 100 — a Product Innovation Score, consisting of 5 equal weight factors-Problem definition & Customer selection & specificity, Problem significance & magnitude, Customer Motivation, Value Proposition, Effectiveness of MUP Concept in testing Value Proposition, with a max score of 20 points.

As incubators, we also ensure that we offer Innovation tools throughout the process to fast-track the journey and mitigate risks, enhance their competencies and skills needed to sell the product, understand and plan the target market & execute the business model, offer mentoring support at the level of technology, innovation design, product business design, marketing/sales or it could be at the level of raising funds/investments for the business, access to markets and early adopters apart from the funding support under 5 M’s- Means, Methods, Mentoring, Market and Money to the startups. Though money is very important, we believe it to be the last of what matters the most. When all of the above ends are provided in majority of the cases, a lot of money shall be substituted, for instance say resources, expertise, infrastructure and so on.

This is another important lesson we learnt from the FORGE mentors during the process of prototyping and the most significant part was understanding that even if the defined value/utility is higher, the user might face other constraints and challenges that might decrease/diminish the real worth of the product to the user. Our focus was not only about building a prototype that delivers the maximum value or one that has a higher utility, but also about understanding the user’s opinion in depth and validating the prototype against usability & deployability constraints”.

With the above lesson in mind, the team met various beneficiaries including NGO’s like WWF-India, forest Officials and farmers and took their opinions to understand the constraints to be considered while building the solution. They also surveyed the adoption barriers to the existing solution and validated their assumption of the problem from the lens of the user. The first step was to program and design their prototypes such that it would differentiate the elephant from other species of fauna in the forest, so as to avoid fake alerts, which only adds fuel to the already panicking residents. They had to design a solution that would operate even in conditions of poor network connectivity[not even 2G] inside the forest. It should also withstand extreme weather conditions that prevail at the higher altitudes.

The first version of their prototype had a smart device with camera and motion sensor to capture the movement of wild animals. The captured picture was compared with pre trained set of data done with Machine Learning for the device to identify if the detected creature is an animal. They then trained the device using a new set of data using ML, particularly for elephants. In case if it detects an elephant, an alert message will be forwarded through a console that can be accessed by the officials of the forest department, who shall then alert the residents & farmers employing LoRaWAN technology.

‘We are thankful to Vivek Poovalingam, the Innovation Director, FORGE and to the external mentors & technical executives from industry who helped us in implementing LoRaWAN technology & structuring the entire process enabling a seamless flow of prototyping, and in achieving a quick Proof-of-Product with the defined value. We are glad that an innovation ecosystem like FORGE exists; A world-class innovation lab like HWjunction with all the essential equipment & machinery for rapid prototyping in Coimbatore is definitely a bliss to unleash the technology & innovation pursuits of students like us.” says Pavith, who believes that FORGE has empowered them with skills & competencies to innovate a deployable solution to the most pressing problem of residents & farmers along the forest boundaries.

Go Back to All Spotlights

Partners
Portfolio
About
Sign up to receive email news, promotions and information.
Thank you! Your submission has been received!
Oops! Something went wrong while submitting the form.
You will be able to opt-out of these emails at any time.
Reach Us